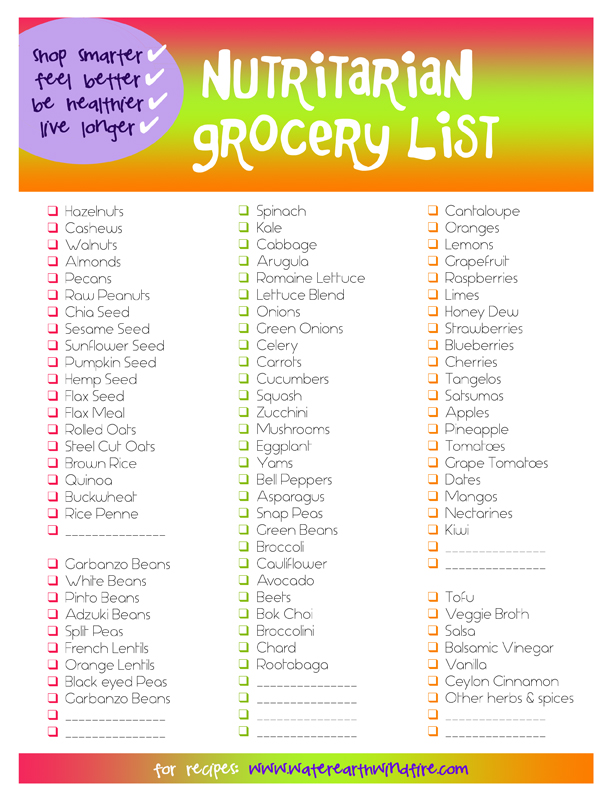 Well, it has been a little over a year since Tim and I embarked on our Nutritarian food adventure, and I thought it would be a good thing to write an update on how it’s going. So … ummm. Well. It’s going okay. Not perfectly. But we’re doing pretty well with it. The reason we started eating this way (the Dr. Joel Fuhrman way) is because of my health. I wanted to feel better. I wanted to do something about the rheumatoid arthritis I’ve had since I was in my early twenties. Something more than I had already been doing all of my adult life. Yeah, I had managed it, but it would flare up with a monster-roar every once in a while and really kick my butt!

So, although he doesn’t have health issues and can eat just about anything, Tim agreed to help me change my diet by changing his too. Otherwise it would have been just too hard to eat differently than he does.  We were very strict with the Eat to Live food program for the first 3 months or so, then we switched to the Eat for Health version, which allows some leeway and is, for me, more of a long-term sustainable way of eating. Tim still eats foods that are definitely not on the list of Nutritarian foods, and I have allowed myself to make some different choices some of the time. I believe that is the only way we can eat this way for the long run.

At first, I noticed a huge improvement in the level of joint pain and other health issues seemed improved. Not totally, but enough that I convinced myself last year to stick to the Nutritarian food program as long as I could. I now can feel it in my body when I have a couple of days of eating too many grains, especially refined grains. Or too much sweet stuff. I worried that if I had something like a homemade cookie, or a piece of fruit pie, that would throw me totally off of the diet and I’d backslide down into the pit. But that hasn’t happened. I think being really strict the first few months was what made it possible to “cheat” once in a while without going overboard. I know what it’s like to feel better now. And I know it’s directly connected to the food I eat.

One thing I took away from Dr. Furhman’s books was this: if not being able to have a cup of coffee everyday (or a glass of wine, or whatever) might be the thing that prevents you from making this a lifelong dietary change, then have your cup of coffee. It won’t kill you. So, I give myself, with grace and softness (not with guilt) to have pasta once a week. Or a piece of sourdough toast every now and then… or a danged homemade chocolate chip cookie! (Tim can eat all the cookies he wants and it doesn’t seem to affect him. Envy …)

Early on in this adventure, I made a Nutritarian grocery list using Evernote (with the checklist feature) which syncs to all of my devices. So I always have the list on my cell phone when I am shopping. It really helps to just look at the list, check off the things we need, and stick to it — at least 95% of the time.

What’s in our cupboards also helps — we don’t keep stuff around that we’re not supposed to eat. We save that for eating out, or in Tim’s case, for stopping at the Dive Bakery on his way to work in the morning.

We could do better. Always. Sometimes I just crave red meat. Rare bison steak. Or elk steak. Sometimes we have that. But way less often than before I started this program of better health.

At the top of this post is my grocery list, and it’s for you to download if you’d like. If you click on the grocery list, it will open in a new window as a pdf file and you can save that to your computer. This won’t work as an Evernote checklist, but if you print it out, it might help you know what to buy on your grocery trips. You could also make your own list in Evernote, or in some other list-making app on your own phone.

Let me know how you’re doing in the comments. Let’s do this together! Good luck.